Enjoy a cruise down the Thames with a selection of craft beer tastings on board.

You can purchase a gift voucher for this tour using the Add to Basket button below and add an optional message. Gift vouchers are valid for 12 months. Each voucher is for 1 person so add more if required.

Love beer? Love a boat trip? Then come on a Thames craft beer cruise with us through the heart of central London.

Following six sold-out public cruises in 2019, the London Craft Beer Cruise is back for our third season in 2021 with an expanded programme, and now has events listed for 2022.

The London Craft Beer Cruise is the UK’s first craft beer festival to be curated entirely by Beer Sommeliers. Every cruise is organised and run by three accredited Beer Sommeliers who have partnered to champion the best in independent beer, from the capital’s top breweries to exceptional examples from further afield.

We hand pick the breweries and beer lists for each sailing to showcase a variety of tastes and styles and will be supported by a staff of beer enthusiasts and representatives from the breweries on board. Guests will be encouraged to ask questions and learn about beer while enjoying a scenic cruise down the Thames, passing some of London’s most iconic sights.

This year’s breweries will include some of the UK’s most exciting craft breweries. We will have a different line-up of breweries every cruise date, so be sure to check out our social media for announcements.

In addition to fantastic beer, guests can look forward to sampling products from other carefully chosen independent producers of craft products, such as: cider from Nightingale Cider in Kent, cheese from Neal’s Yard Dairy, with other artisanal food and drink producers joining us on board for each date too.

As these are lunchtime cruises, so we will have a smashing food offer from the award-winning MYPIE and we’ll also offer cheese boards from world famous Neal’s Yard Dairy.

Your ticket includes a souvenir glass and five beers. 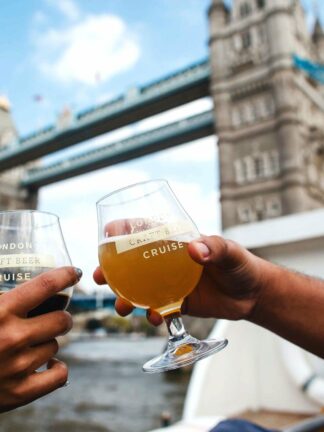 You're viewing: London Craft Beer Cruise £44.00
Add to basket
We use cookies on our website to give you the most relevant experience by remembering your preferences and repeat visits. By clicking “Accept”, you consent to the use of ALL the cookies.
Cookie settingsACCEPT
Manage consent